Oh Marilyn Manson, you’ve let me down. You used to be about something new and exciting. The wild stage shows, the styling, the aggressive defiance; it was something different and attention grabbing. And beyond that, beyond the eyeliner and leather, there was some really great music. Antichrist Superstar, Holy Wood and Mechanical Animals (my personal favourite), these were powerful and intense records. Compelling concept albums that really created something different with real attention to detail. The design, the story-lines, the videos, the intricate lyrics – they were real pieces of art carefully put together. There were the hits, the big sing-a-long anthems, and quieter classics. Coma White, Target Audience, Tourniquet; these were incredible pieces of sound. Songs about numbness and nihilism, love and violence, beauty and decay and a heavy dose of darkness. I remember hearing these albums as a teenager and them really melting my little mind, I was enrapt. I saw the band play when I was 18 and the stage show was immense, large props, costume changes, dancing girls, it was an amazing experience. 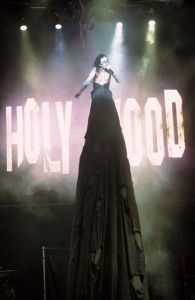 So now what? Maybe I’m older, less easily impressed, but the band have produced very little new music since Holy Wood that’s had much of an impact on me. In some ways it’s the same old thing, but the rest of the world has moved on. Most of what I’ve heard recently has felt too much like a tedious stab at being controversial (more slagging off religion and talking about drugs? snore.) or whiny references to ended relationships (Manson seems to hit headlines more now for dating starlets and pornstars than for actually creating great music). Popstars like Lady Gaga and Rhianna are creating things that are both more innovative and controversial. Shock in itself isn’t enough to make a career, and audiences now have seen it, thery’re not so easily startled. And behind the wild statements and antics, it doesn’t feel like there’s much substance. Frequent changes in musicians have made the act feel less like a cohesive band and I think the music has suffered.  I’ve heard reports from a lot of sources from his Download festival performance a few years ago, he seemed old and wasted, he’d lost it.

Trent Reznor’s still producing music that seems relevant and exciting (see recent oscar-winning collaboations  for The Social Network and the music he did for Girl With The Dragon Tattoo), but Manson seems to have been left behind. His hotly anticipated film about Lewis Carrol ‘Phantasmoagoira’ , due to be staring Lily Cole as Alice, seems to have completely dipped off the radar. I feel like a teenage part of me is still waiting for a return to greatness, but I may be willing to accept that Marilyn Manson was a piece of its time, it has it’s perfect place in the late 90s and perhaps that shouldn’t be touched. Being a Manson fan used to be something of a statement in itself, but now it’s more likely to receive a response of ‘Oh, is he still around?‘. It’s sad, but doesn’t detract from the greatness of some of the earlier work. And it’s definitely not without its influence, you can see a bit of Manson in many of today’s biggest rock (and even pop) acts.

This recent nostalgia-trip and reflection was triggered off when I recently caught this Manson-inspired editorial by one of my favourite photographers, Michael David Adams. I feel like he’s captured some of Manson’s quite iconic looks (there are some nods to a few different eras here) and translated them into a glossy fashion-format. it made me think of how many people, musicians,artists and others, have drawn influence from Manson and his career. He may have lost some of his original impact, but he still remains a distinctive cultural icon and will always have his place a generations history. It was quite the fantastic show.

Here comes my round-up of the new and recent culture that has caught my eye. With a bit of a mental-health slant (well, sort-of). Here are a few of my picks of recent weeks, enjoy!

Last week saw the return of the nation’s favourite display of arrogance and narcissism and general meanness. Another group of entrepreneurs brutally fight it out to go into business with Sir Alan Sugar. Cue bitchy back-stabbing and stitching-up, compulsive car-crash viewing. Watching this always reminds me of the Board & Fritzon paper on high levels of personality disordered traits (psychopathy, OCD, narcissism) in business managers. Wednesday at 9.00 on BBC1.

The Master and Margarita at the Barbican

I’ve been excited about this one for a while. Bulgakov’s classic of black magic, decadence and insanity on the streets of Moscow, is this month brought to the London theatre. The book, which inspired Mick Jagger to write ‘Sympathy for the Devil‘, features naked, flying witches, a talking cat and a rather brutal decapitation, so I’m very curious as to how they will bring this to the stage. Rather like an grown-up Alice in Wonderland, this surreal and often very bizarre tale tells of how the devil comes to Russia, and sooner or later everyone is losing their heads (some literally).

I decided to read this book after hearing all the fuss about it. Baring in mind I have neither read Twilight, nor am familiar with fan-fic (aside from a time about aged 15, when my all-girls school had a bit of a craze for Harry Potter slash, passed around at the back of the classroom), I can’t really comment on the book’s relating to either. There are no vampires in this one, but stars an emotionally aloof playboy love-object who bewitches our rather personality-less virginal heroine. She wants him, he wants her, but on the condition that she enter his kinky world of BDSM. If you’re looking for a good bit of book-porn, you might be disappointed. The sex scenes are actually remarkably short and simplistic, there’s a lot more time given to a rather twee and trite love-story. High-class erotica this also isn’t; there’s rather a lot of cliched phrases like ‘come for me baby!‘ and our heroine is always saying things to herself like ‘Holy cow!‘ when she sees her beau take off his shirt. It is rather silly but enjoyable in that way. There’s quite a bit of speculation about how Christian must have had an awful past to develop his ‘need’ for domination, which I found a little unconvincing. Apparently there are 2 more books to come, not sure if I’ll bother.

Ah advertising, one of the greatest abuses of psychology to date. Don Draper and Co return today for more whiskey in the morning, casual adultery, sexism and sharp dressing.   I’m hoping there’ll be a bit more of a focus on little Sally Draper, child of the Draper’s broken marriage, carted off to therapy in previous series by her neurotic mother. Undoubtedly smarter than she is disturbed, Sally seems to work people out. And she mixes a good cocktail.

My favourite daddy-hating, adidas-wearing nu-metallers are on tour this week. There can be something very therapeutic about screaming ‘Shut up! Shut up! Shut up, I’ll f**k you up!’ at the top of your lungs. There’s no-doubt to be some coverage of tracks from their marmitey dub-step album, produced with Skrillex. If you prefer something with a little more depth, prog-metal superstars Tool just announced their releasing a new album.